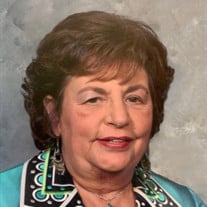 Diane G. Happel passed away on December 31, 2021. Diane was born on March 27, 1943 as the only child to Quinto and Ann. She grew up in Dearborn and graduated from Western Michigan University. From there, she went on to work at Channel 2 in Detroit. This is where she met Warren, who worked for RCA and called on the station. They were married on March 1, 1969. They had three children-Paul(Melissa), Eric(Kelly), and Cara(Marcelo), and eight grandchildren-Justine, Abby, Eva, Sarah, Audrey, Lauren, Mateo and Sammie. > Diane was a loving wife and mother. She always said, "a family who eats together stays together." She made sure the family did just that, no matter how busy, every night. Diane volunteered throughout her life. She was the president of League of Women Voters In Detroit, president of the church board twice at Christ the Redeemer, and president of the band boosters. She kept score for every baseball and softball game her children played, while Warren coached. She started a hunger center at the church, and was often involved in organizing the yearly CROP Walk. She was always giving of herself. > Diane was a devoted baseball and football fan, the Detroit Tigers being her favorite team. She and Warren loved to feed the birds, and the bird book was always handy to identify elusive species. Diane was also outspoken in her political beliefs and volunteered for many political campaigns supporting democratic candidates. > Diane had a zest for life, and loved nothing more than spending time with family and friends. The Happel house was welcoming to all, as she always treated friends like family. Her absence will be felt by all who knew her. > A memorial service will be held at a later date. In lieu of flowers, donations can be made to: Christ the Redeemer Lutheran Church, 9201 Brecksville Road, Brecksville.

Diane G. Happel passed away on December 31, 2021. Diane was born on March 27, 1943 as the only child to Quinto and Ann. She grew up in Dearborn and graduated from Western Michigan University. From there, she went on to work at Channel 2 in... View Obituary & Service Information

The family of Diane Happel created this Life Tributes page to make it easy to share your memories.

Send flowers to the Happel family.