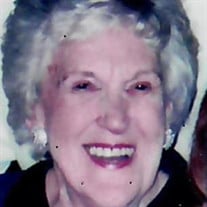 Eleanor Nemeth Simko, 100, was born into eternal life on March 29, 2018 and welcomed with great rejoicing into heaven by her husband of 50 years, Michael, her beloved father and mother, Carl and Agnes Nemeth, and her brother, Elmer and a host of family members and friends. She is the beloved mother of Eileen Chwalibog (Andrew), Janet Buckingham (George), Mary Denise O’Boyle (Michael), and Michelle Simko (Frank Chenette); the loving grandmother of Michael Chwalibog, Janet Chwalibog, Megan O’Boyle, Jenny Chwalibog, Daniel Chwalibog, Eileen O’Boyle; great grandmother of Hadley, Colby, Cooper, Harper Chwalibog, Davis Chwalibog, and Tula Davis; beloved sister Margaret Sepsi, and many nieces and nephews. Eleanor was a graduate and proud alumna of Ursuline Academy and worked for Nela Park in the 1930’s. After her marriage to Mike Simko in 1941 her adventurous spirit manifested itself when she followed him with other Army wives for 3 years all over the South as he trained for service in the 17th Airborne Division to fight overseas in WWII. After he was deployed she worked as a Rosie the Riveter until the end of the war. Upon his return as a wounded vet she remained at his side through all the years of surgeries and healing. They built a life together that eventually welcomed 4 girls who were the apples of their eyes. Eleanor devoted her life to nurturing her family, sewing and tailoring clothes for her girls, creating a beautiful home, singing and playing the piano by ear, cooking and baking Hungarian pastries for family and friends. Her adventurous spirit rose again when she traveled all over the U.S., Germany, South Korea and Asia to visit her grandchildren and relishing every moment of it. At age 86 when she could no longer live alone her sense of adventure came to the forefront again. As she left her beloved home that she and Mike had built and in which they had raised their family, she turned with a set of her jaw and said, “ I am going to look at this as another adventure.” And off she went to Jennings where she has lived for 14 of some of the happiest years of her life. How she has loved her friends and caregivers, the medical staff, the housekeeping staff, and Chef Michael who have all become extended members of her family. The love and care she has known at Jennings has been treasured by her family beyond words. It truly was her home filled with love and joy and blessing for Eleanor as well as all of us. Family and Friends will be received at VODRAZKA FUNERAL HOME OF INDEPENDENCE, 6505 BRECKSVILLE RD., (RT. 21, SOUTH OF ROCKSIDE), FRIDAY, APRIL 6, 2018 FROM 6-8 P.M. A Funeral Mass will be celebrated on Saturday, April 7, 2018 at Jennings Center for the Aged, 10204 Granger Rd., Garfield Hts. at 1:15 p.m., with visitation one hour prior to Mass. (PLEASE MEET AT JENNINGS). Interment will be at Arlington National Cemetery at a later date. In lieu of flowers, please consider a donation to Jennings Center for the Aged.

Eleanor Nemeth Simko, 100, was born into eternal life on March 29, 2018 and welcomed with great rejoicing into heaven by her husband of 50 years, Michael, her beloved father and mother, Carl and Agnes Nemeth, and her brother, Elmer and a host... View Obituary & Service Information

The family of Eleanor Nemeth Simko created this Life Tributes page to make it easy to share your memories.

Eleanor Nemeth Simko, 100, was born into eternal life on March...

Send flowers to the Simko family.