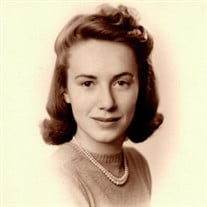 Helen Miriam Merleno (nee Wisnieski), 96, became one of God’s Angels on February 13, 2021. After a short stay at the Village of St. Edwards in Fairlawn, she transitioned to eternal life with loving family at her side. She leaves behind her children, Annette Pedersen (husband Fredrick); Diana Grabowski (husband Roger); David Merleno (wife Karen); Denise Merleno; grandchildren, Michael Grabowski, Joseph Grabowski, Dana Pedersen, Lauren Stephens, and Dionna Fernandez as well as 10 great-grandchildren. She was preceded in death by her brother Robert Wisnieski; sister Joyce Kramer; granddaughter Melanie Surace; and many cousins and friends. Her mission in life was never to be a passenger, she was a driver, and she drove everywhere…Born in Independence, Ohio she was the youngest child of Joseph and Viola Wisnieski. Joe co-owned the Ford Garage where Miriam was always eager to volunteer moving cars. She attended nursing school, followed by a short career as a Teletype operator at Hopkins Airport during WWII where she logged in airmen as they returned from flight. There she met her handsome beau, Joe Merleno. She was smitten with this young airman in uniform. After a whirlwind romance, they married and started their life together by having four children and raising them in a home they built in Seven Hills. Miriam’s career spanned 24 years as a civilian employee in service to the federal government. She began her career at the VA Hospitals in Brecksville and Wade Park, but her career took off when she joined the 9th Coast Guard District in Cleveland as a Civilian Personnel Officer. She worked there for many years and just as her thoughts turned towards retirement, she was offered a promotion and jumped at the opportunity to move to New Orleans, Louisiana where she held the position of Chief of Civilian Personnel for the 8th Coast Guard District until she retired in 1988. But retirement was not for her. She continued her life of service through her volunteer efforts which included assisting seniors and those who had difficulty filing their taxes, working as a disaster relief volunteer for the Red Cross and helping complete a home for Habitat for Humanity. She served as the secretary for her investment club. She loved to travel and explore new places, particularly by car, which she did well into her 80’s. She read every book she could get her hands on and they knew her well at the Middleburg Hts. Library. Her spare room was filled wall to wall with books which served as her private library. She was happy to share her books with anyone showing interest! Hers was a life well lived. Arrangements entrusted to Vodrazka Funeral Home: www.vodrazkafuneralhome.com / 216-524-3900. Due to the current pandemic, the family asks that you keep Miriam in your thoughts and save the date, July 29, 2021, for a celebration of her life. Donations honoring Miriam’s life may be made to the Middleburg Heights Library, 16699 Bagley Rd, Cleveland, OH 44130. Your donations will help fund reading and lifelong learning. Please check back for updates on services.

Helen Miriam Merleno (nee Wisnieski), 96, became one of God&#8217;s Angels on February 13, 2021. After a short stay at the Village of St. Edwards in Fairlawn, she transitioned to eternal life with loving family at her side. She leaves behind... View Obituary & Service Information

The family of H. Miriam Merleno created this Life Tributes page to make it easy to share your memories.

Send flowers to the Merleno family.