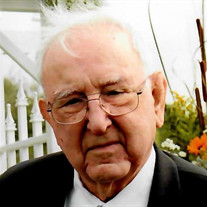 Hampton Shadrach Born September 25, 1920 and passed away May 2, 2018. Beloved husband of 68 years to Betty Jane (Zinkan). The son of Hampton S. and Laura Shadrach (Asman). Loving father of Hampton Wayne (Karen), Richard Lee (Cathy), Cheryl Lynn Kravetz (George) and Ronald James (Bonnie). Dear brother of the late Kathryn Chipka, Juanita Blake, and Donald. Grandfather of nine and great-grandfather of six. Hampton grew up in the Old Brooklyn neighborhood and was a long time member of Troop 34. He lived in Chicago for a time where he went to high school and wrestled. He was the Captain of the wrestling team, took second in the City of Chicago and was invited to participate in the State Championship Tournament. A World War II vet serving in the Army Air Force (1941-1945) he achieved the rank of Staff Sergeant. He retired from the East Cleveland Fire Department as Captain (acting Chief) after 33 years in 1977. During his off hours from the fire department he operated a construction and home improvement company. Hampton settled in Independence where he designed, built and finished two homes for his family as it grew larger. He was a Cubmaster and Scoutmaster dedicating his time taking scouts to summer camp, on canoe trips and coaching little league baseball. He was active for over 50 years in the community and school through the Kiwanis and Key Club. He was a Kiwanis stalwart at the Chicken BBQ, Pancake Breakfast, Home Days and the Fishing Derby. He helped construct the City Gazebo and was known as the ‘Cupola King’ building the Cupolas that adorn the Bandstand and Gazebo in town. With Betty he visited Europe, Hawaii and Alaska. He built a model railroad replica of the U.S. circa 1940 with industrial, commercial, agricultural, mountain and residential scenes that included his boyhood home on W. 10th St. in Old Brooklyn. When not running his train with his 9 grandchildren he made children’s furniture, doll house furniture, games and toys with them in his workshop. FUNERAL SERVICE FRIDAY, MAY 4, 2018 AT VODRAZKA FUNERAL HOME OF INDEPENDENCE, 6505 BRECKSVILLE RD., (RT. 21, SOUTH OF ROCKSIDE), AT 11:00 AM. Family will receive friends to pay tribute to and celebrate the life of Hampton at VODRAZKA FUNERAL HOME, 6505 BRECKSVILLE RD., (RT. 21, SOUTH OF ROCKSIDE), THURSDAY, MAY 3, 2018 FROM 4-8 P.M. Interment Mapleshade Cemetery. In lieu of flowers, donations can be made to the Independence Kiwanis or the Boy Scouts of America.

The family of Hampton Shadrach created this Life Tributes page to make it easy to share your memories.

Send flowers to the Shadrach family.