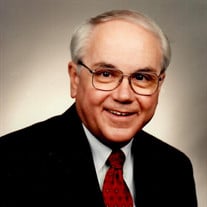 JAMES A. HUDAK, Attorney at Law of Bentleyville, Ohio. Beloved husband for 50 years of the late Judith A. (nee Schwamel), devoted and loving father of Nancy Hudak (Daniel O’Donnell) and David Hudak (Jill); adoring grandfather of Andrew David Hudak; cherished son of the late Andrew E. and Ann K. Hudak (nee Krejci) and brother of the late Daniel J. Hudak. James passed away unexpectedly on January 19, 2019. James was born in Cleveland, OH and graduated from Maple Heights High School. He attended Case Institute of Technology where he graduated with honors in 1962 earning a Bachelor of Science degree in Electrical Engineering. James went on to earn a Master of Business Administration degree in 1967 from Case Western Reserve University as well as a Juris Doctorate in 1974 from Cleveland-Marshall College of Law. He was admitted to practice law in the State of Ohio as well as before the United States Patent and Trademark Office. James began his engineering career in 1962 at Union Carbide Corporation as a Plant Engineer. He then joined Ohio Bell as an Engineer, progressed to Angell Nail and Chaplet Company as a Plant Engineer and Eaton Corporation as a Corporate Engineer focused on new product analysis and valuation. While working as an engineer, James also attended Cleveland-Marshall law school. He started his law career with Eaton Corporation as a Corporate Patent Attorney and then went on to join Parker Hannifin Corporation. James became a Sole Practitioner at James A. Hudak, Attorney at Law in 1978 where for over 40 years he was engaged in the private practice of law primarily in the area of technology transfer and intellectual property matters for multi-national, medium and small size corporations. He counseled countless inventors through the complex process of patent, trademark, copyright, trade secret and licensing matters. His area of technical expertise included electronic, integrated circuit, electrical, electro-mechanical, mechanical, hydraulic and pneumatic devices. He was dedicated to the practice of law and assisting clients achieve their dreams of developing inventions and taking these inventions to market. James was a member of the American Bar Association, Ohio State Bar Association, Cleveland Bar Association, American Intellectual Property Law Association, Cleveland Intellectual Property Law Association and Licensing Executives Society. Most of all, James loved his family deeply and was especially proud of his two children, Nancy and David. He spoke often of their achievements great and small. He was always there for family and friends offering love and support with a positive “can do” attitude. He loved Cleveland sports and Michigan football, a bond he shared with his daughter, Nancy. He loved his grandson, Andy, and was his No. 1 fan always making sure to attend his sports games and holiday concerts. We love you Dad and miss you terribly. Your memory will forever live on in our hearts. Mass of Christian Burial on Friday, January 25, 2019 at 11:00 a.m. at St. Joan of Arc Church, 496 E. Washington Street, Chagrin Falls, Ohio. (PLEASE MEET AT CHURCH). Entombment at All Saints Cemetery, Four Evangelists Mausoleum, Northfield, Ohio. Friends may call at VODRAZKA FUNERAL HOME OF INDEPENDENCE, 6505 BRECKSVILLE ROAD (RT. 21, SOUTH OF ROCKSIDE), THURSDAY, JANUARY 24, FROM 4:00-8:00 P.M.

The family of James A. Hudak created this Life Tributes page to make it easy to share your memories.

JAMES A. HUDAK, Attorney at Law of Bentleyville, Ohio. Beloved...

Send flowers to the Hudak family.