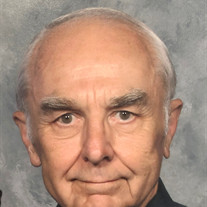 Warren Paul Happel, age 88, of Brecksville, Ohio passed on Sunday, March 1 2020. Warren was born on September 13, 1931 in Quincy, Illinois, to Ellen Tomamichel Happel and Karl Happel. He married Diane Gaudi Happel on March 1, 1969 at Grace Lutheran Church, Detroit, Michigan. Warren is survived by his wife Diane, three children and their spouses, Cara (Marcelo) Aller (Medina, OH), Paul (Melissa) Happel (Charlotte, NC), and Eric (Kelly Chang) Happel (Portland, OR). Warren's grandchildren include: Justine, Abby, and Eva Happel (Paul/Melissa); Sarah, Audrey and Lauren Happel (Eric/Kelly); Mateo and Samantha Aller (Cara/Marcelo). Other family includes his sister, Rayleen Holzgraefe and her late husband Howard of Quincy, IL and their three children and families. Warren served in the Navy during the Korean War, before attending Valparaiso University. He transferred to the University of Michigan while working full time where he earned a degree in electrical engineering. He worked at a number of television and radio stations in engineering throughout his early career; then he worked for John Brown Consultants in Michigan. In 1982, he and his family moved to Brecksville, Ohio where Warren worked for Scripps Howard Broadcasting in Cleveland and Cincinnati as the Vice President of Engineering, building the company's television and radio enterprise. Warren was always proud that he played a major role in the completion of multiple radio and TV towers throughout the country. He was also instrumental in bringing HGTV to life. Warren enjoyed his work and retired a few times as it did not seem to stick the first couple of tries. Warren loved two things more than others: his family and fishing. He was a dedicated husband, father and grandfather who could always be relied upon. Through all of Diane’s recent health challenges, Warren was always by her side helping her. He was a loving dad who supported his children's activities, including coaching their baseball and softball teams. Warren was hardworking, loyal, kind, and had an amazing sense of humor. He was also a devoted grandfather: he watched proudly as his grandchildren have grown, and was always there to help family. He will be missed beyond words. Warren loved to fish. He had more gear and more strategies than most for catching the next BIG fish! Whether riding his bike to the Mississippi River, catching walleye in Lake Erie, or fishing in local lakes in his green john boat. No fish was safe when Warren was near. His love of fishing was passed on to the next two generations. In lieu of flowers PLEASE send contributions to your local Salvation Army or Christ the Redeemer Lutheran Church in Brecksville, OH. Funeral Service at Christ the Redeemer Lutheran Church, 9201 Brecksville Road, Brecksville, Ohio on Friday March 6th, at 11:30AM. Family will receive friends to pay tribute and celebrate the life of Warren at VODRAZKA Funeral Home, 6505 Brecksville Road, Independence, Ohio on Thursday March 5th from 5 - 8 pm.

The family of Mr. Warren Paul` Happel created this Life Tributes page to make it easy to share your memories.

Send flowers to the Happel family.